Words with an Author | Ted Galdi

Today I got the chance to interview the awesome Ted Galdi, author of the upcoming book Elixir to be released in August 2014. 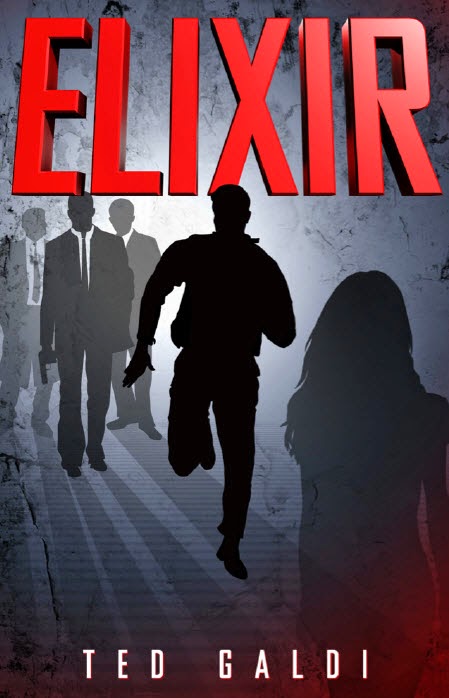 1.     How did you get into writing? When did you first start writing?

I’ve always been into writing – even as a little kid scribbling out crayon-illustrated stories at my old dining room table.  I didn’t start “formally” writing though until I was about fifteen; screenwriting was my initial hook into it all.  I’d always been a big movie fan, so writing screenplays was a natural transition into it.  None of them actually wound up getting made into real movies, but it was still a good experience and eventually led to the novel writing today.

2.     Where did you come up with the idea for Elixir? Who/ what is your inspiration?

At first, I just thought it would be a cool premise to base a book around an extremely intelligent kid who got thrown into wild situations against his will because of his intellect.  In the beginning though, there was no concrete story, only that premise.  After thinking about it for a few months, I had the idea to add the love-story element; this really made the flow of the book come together, since it gave Sean, the protagonist, something to fight for.  Inspiration-wise, my biggest influence when doing the “scenes” in the book was music.  I’m easily inspired by a good song.

3.     Are any of your characters based on people you actually know, if so which ones?

Nobody is based entirely on a real person I know.  However, there are definitely certain things about most of the characters that were inspired by real people I’ve come across; everyone from Sean all the way down to the bit-part characters.

4.     Have you written anything before Elixir?

Formally, just the screenplays, which I did when I was a teenager.  Once I got to college though – and then the business world afterward – my writing unfortunately went on pause.  I took a ten-year hiatus between screenwriting and breaking into novels.  It’s great to be back in that world though.  I really missed it.  I just had so much other stuff going on in my life during those years (school, starting a career, etc) that I wasn’t able to dedicate enough of myself to it to make it worthwhile.

5.     If you had to pick only five books from your bookshelf you could keep, what would they be?

Hmmm…The Catcher in the Rye.  Slaughterhouse-Five.  Liar’s Poker.  Rabbit at Rest.  Where the Wild Things Are.

6.  If you could pick one character from Elixir whose perspective (besides Sean) that you could write from, who would it be and why?

The old man who wakes him up at the foot of the Pantheon.  I don’t want to give anything away, but though that character plays a very small part in the actual story, he represents something much “larger,” which could make for some pretty interesting story perspectives.

7.  Who is your favorite character from any book and why?

Max from Where the Wild Things Are – he symbolizes the imaginative power we all have, which tends to sadly get muffled as we get older and things get in the way.  He reminds people they shouldn’t lose sight of that.

8.   How long did the writing process take for Elixir? From conception of the story to final publication?

I came up with the premise in late 2012, then didn’t have the love-story idea for a good six months, which kick started the initial outline.  I started writing the actual chapters about a year ago.  All in all, it was around a year and a half.  I had a full-time job through the whole process though, so was only able to write on nights and weekends.  This made things kind of tough.  But I really enjoyed doing it, so the weird hours weren’t a problem.

9.  Who are some of your favorite authors?

I really admire Kurt Vonnegut, John Updike, and JD Salinger.  In terms of newer authors, I recently read A Visit from the Goon Squad, and like Jennifer Egan’s style a lot.


10. What actors/ actresses could you see playing the characters of your book?

I get asked this a lot about Sean.  Though there are some good young actors today, I haven’t seen enough of their stuff to be dead set on one person.  Ideally though, I tell people it would be a young Leonardo DiCaprio, from the Basketball Diaries days.

11.  How did you come up with the title and cover of Elixir? Did they morph as you wrote the book, or were they constant?

The title was constant.  It of course relates to the central conflict in the book – the search for a cure, or elixir, for Sean’s girlfriend, Natasha.  And the concept of a one-word noun was appealing to me; I think titles like that tend to grab attention.  So Elixir seemed fitting.  As for the cover, I live in Los Angeles and have friends who work in entertainment.  Luckily, I was able to get put in touch with a very talented artist who does promotional artwork for movies; she made the cover based on a terrible stick-figure sketch I drew.  It definitely has a cinematic feel to it, which I think is pretty cool.  Like the title, the design was constant through the whole process.

12. Are you planning to write any other books besides Elixir?

I absolutely want to write more books.   I loved writing Elixir.  As for what to do next, I’ve been thinking about three different ideas – one being an Elixir sequel – but haven’t decided on one yet.

13.  What would your advice be to someone who's aspiring to be a writer?

Don’t try to force fit your story into a current “hot” trend or sub-genre because you think it’ll be easier to make money that way.  Write a story that means something to you on a personal level, no matter the business climate of the book industry at the time.  The authenticity will show, and you’ll ironically sell more copies than you would’ve by chasing a sales trend.

14.  Finally, just to wrap things up, what's your favorite color and why?

Blue.  Why?  That’s a really hard question, which I can’t honestly answer.  I just kind of like it.  Not a very climatic way for me to end this interview, but at least I didn’t make up some fake story about the color blue.  That just wouldn’t be right.