"A WEEK AGO
Dinah's cousin, Claire, cut her wrists.

FIVE DAYS AGO
Dinah found Claire's diary and discovered why

TODAY
Dinah will find the boy who broke Claire

BY TOMORROW
He'll wish he were dead"

I had extremely mixed feelings about this book. First of all, the plot itself was slightly dramatized. Maybe it's just me personally but there would definitely have been better ways to get her revenge than doing it herself, if she had done her research properly, she would have understood and known it was (spoiler alert!) Dex all along. She acted rashly and basically almost ruined a perfectly good guy's life. Anyways once you get over the initial feeling of 'oh this is kinda stupid' you get really into the book.

Now for the characters. To be completely honest, there was nothing that special about Dinah. She is the typical heroine from every book. The 'misunderstood' girl who 'still hasn't found herself.' But I have to admit, she's pretty ingenious at times. She can leave people speechless and utterly confuse them. You can like her and hate her at the same time. Other than that she's pretty typical, as is Tabs and Brucey, her 'posse'. Now let's talk about Dex. I have very strong emotions about him. Of course, like every other reader I was taken in by his charm, but of course every character I like either a) turns out to be bad or b) dies. For most of the book I thought he was pretty freaking awesome, but then of course he turns out to be Claire's raper....sigh.... Now Brooks. I can't be more happier that he's good. I actually started liking him in the middle of the book and his personality didn't at all reflect the accusations Dinah had put against him. By the end of the book, I was so emotionally exhausted, from Claire dying to Chandi not harming herself.

Overall, even though I was extremely emotional after the book, I still feel as though the general plot was overdone way too many times. Other than that it was a really good read.
Posted by Unknown at 6:56 PM No comments:

The Infinite Moment of Us | Lauren Myracle 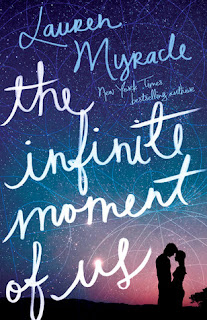 "For eighteen years Wren Grey has been the model daughter, which in her family means all As, zero boyfriends, and early acceptance into a pre-med program. But as high school graduation nears, so does an uncomfortable realization. Pleasing her parents once overlapped with pleasing herself, but now...not so much. Wren needs to honor her own desires, but how can she if she doesn't even know what they are?

Charlie Parker, on the other hand, knows exactly what he wants. A gentle boy with a troubled past, Charlie has loved Wren since the day he first saw her. But a girl like Wren would never fall for a guy like Charlie- at least not the sort of guy Charlie believes himself to be.

And yet certain things are written in the stars. In the summer after high school, Wren's and Charlie's souls will collide. But souls are complicated, as are the bodies that them...

With all the sweetness-- and steaminess-- of first romance, this gorgeous novel, from one of young adult literature's most distinctive voices, explores that time between high school and college when life seems to be just beginning, and everything-- including true love-- is possible."

This book connects with me so much, it absolutely terrifies me. I'm being completely and utterly honest when I say that Wren is me. I am Wren. I am that girl who spends all of her time doing homework to try and get ahead and whose had zero boyfriends. Rather than focusing on the romance (which was really adorable), I was more focused on Wren and her struggle with her parents. This book makes me rethink my entire life and all of my choices up until now, whether they were my choices or theirs. I want to believe they were mine...but I have no idea anymore.

Ok now onto the actual book. I have to say, I really liked the way Charlie was portrayed. He wasn't the perfect male, which is what made him perfect. He made mistakes throughout the book, which made him even more likable. His entire family story was extremely touching. His childhood was terrible and so was everything that happened with his brother was so sad and painful to even imagine. But regarding his entire situation I would feel the same way as Wren, sheltered, not ever being to fully understand how he felt.

Starrla was an interesting character. She's completely crazy but completely realistic. She's had probably the worst childhood and things aren't getting better for her. She's getting caught up in the wrong crowd and the readers know that eventually she's going to crack. She has no one motivating her to do better, to be better and it's all going to end badly for her.

Overall I really liked this book, and I need another book like it. Like now.
Posted by Unknown at 6:39 PM No comments: