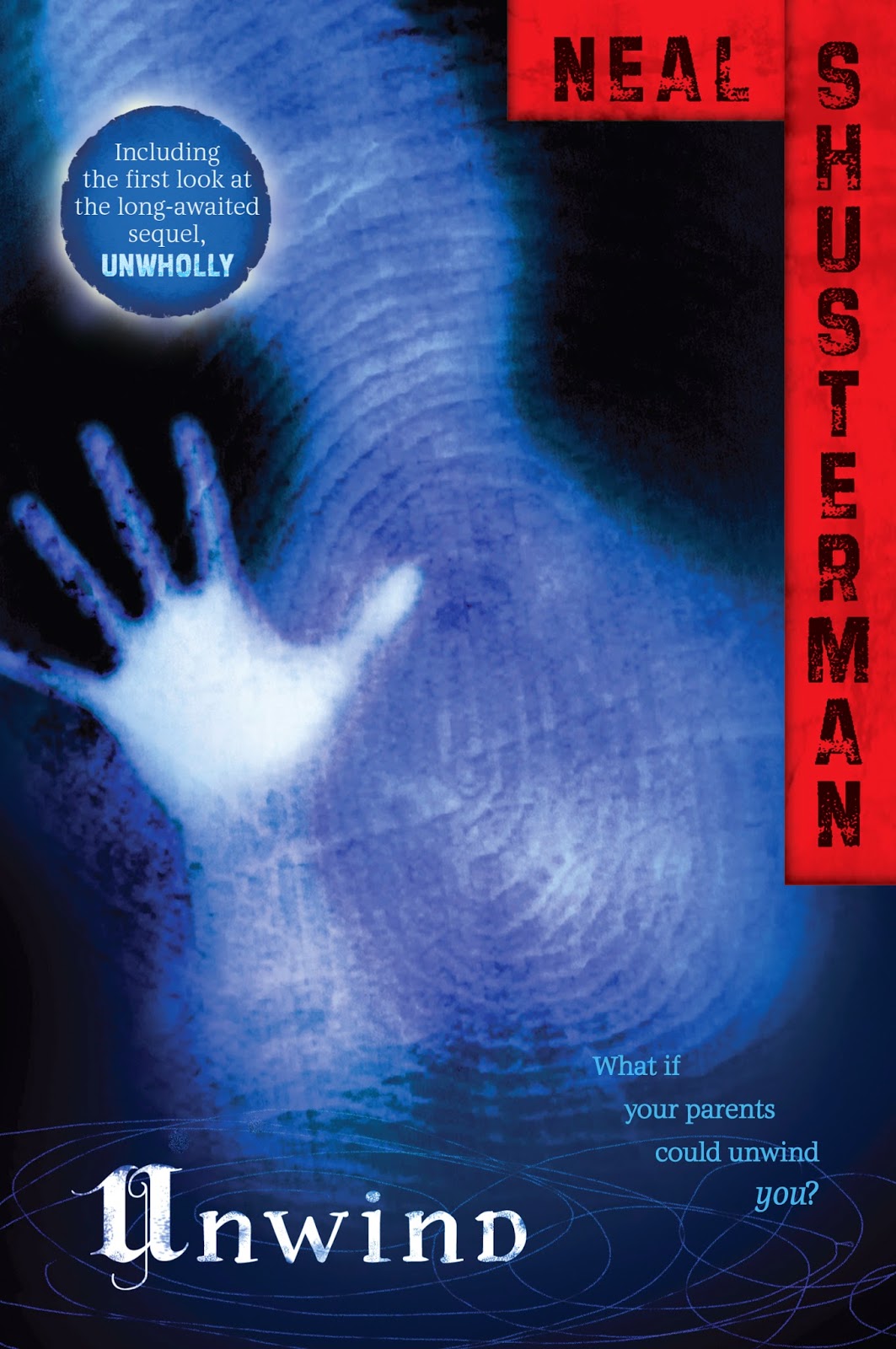 The Second Civil War was fought over reproductive rights. The chilling resolution: Life is inviolable from the moment of conception until age thirteen and eighteen, however, parents can have their child "unwound," whereby all of the child's organs are transplanted into different donors, so life doesn't technically end. Connor is too difficult for his parents to control. Risa, a ward of the state, is not talented enough to be kept alive. And Lev is a tithe, a child conceived and raised to be unwound. Together, they may have a chance to escape-- and to survive.

Neal Shusterman does a fantastic job of creating a parallel world whose citizens are battling the same ethical question we are, except on a more severe scale. After a second civil war, which divides the country into pro-life and pro-choice, an eerie compromise emerges: the unwinding. A human is untouchable from the moment of conception until the age of thirteen, when a parent can have their child unwound, each body part is given to different donors. A method has been perfected to be able to easily transplant any and every organ. This book follows Connor, Risa and Lev, all of whom came together from completely separate worlds and separate beliefs, having a common goal: to survive until eighteen and avoid unwinding. Shusterman does a great job of giving radically different perspectives that all are understandable; he also does an amazing job of integrating dark and heavy topic with comical and light moments. I recommend this book for any teenager who can stomach a fairly dark and eerie book.

Email ThisBlogThis!Share to TwitterShare to FacebookShare to Pinterest
Labels: 5 Stars 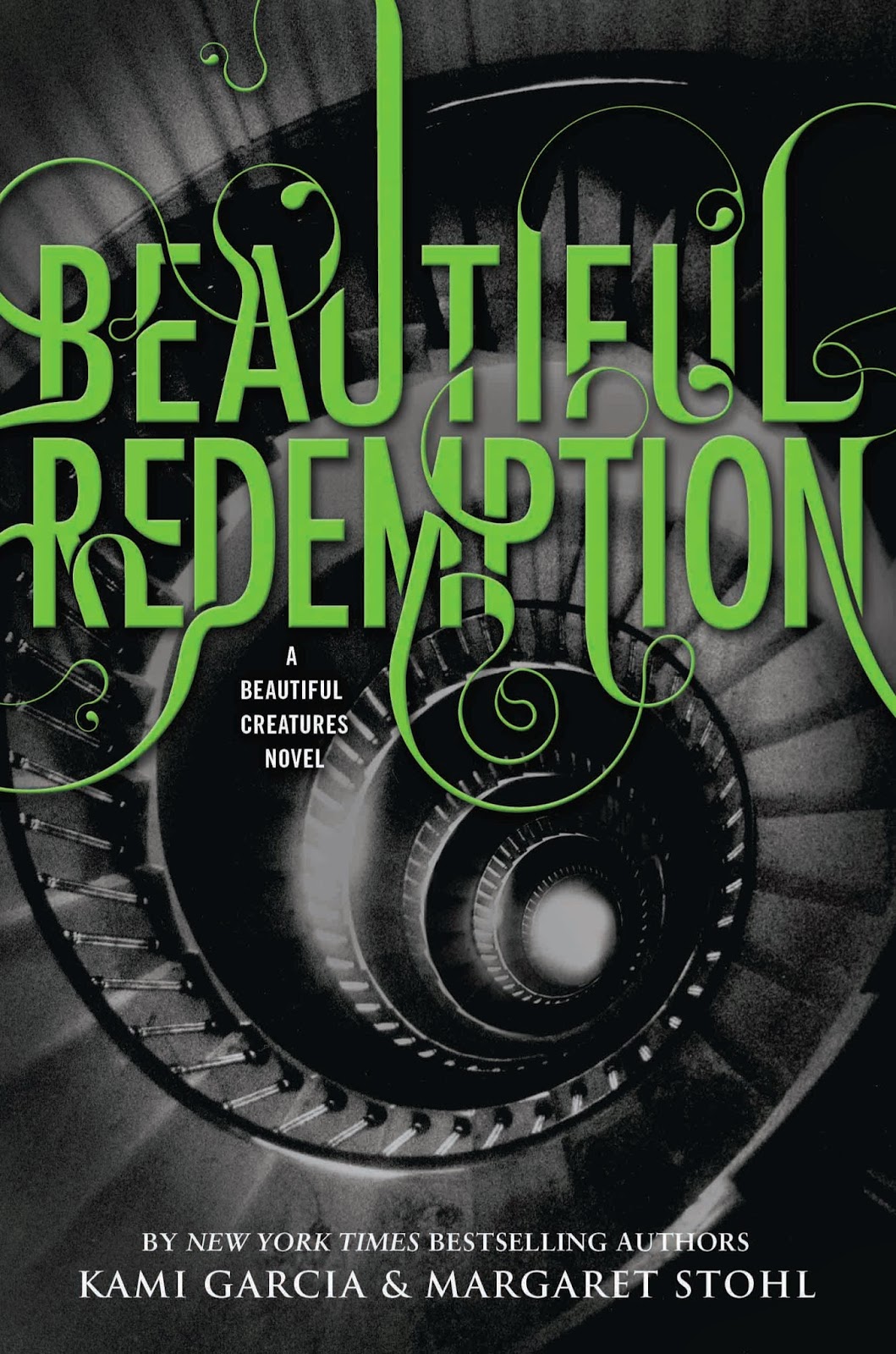 Ethan Wate has spent most of his life longing to escape the stiflingly small Southern town of Gatlin. He never thought he would meet the girl of his dreams, Lena Duchannes, who unveiled a secret, powerful, and cursed side of Gatlin, hidden in plain sight. And he never could have expected that he would be forced to leave behind everyone and everything he cares about. So when Ethan awakes after the chilling events of the Eighteenth Moon, he has only one goal: to find a way to return to Lena and the ones he loves.

Back in Gatlin, Lena is making her own bargains for Ethan's return, vowing to do whatever it takes-- even if that means trusting old enemies or risking the lives of the family and friends Ethan left to protect.

Worlds apart, Ethan and Lena must once again work together to rewrite their fate, in the stunning finale to the Beautiful Creatures series.

Beautiful Redemption is the fourth and final book of the Caster Chronicles. And I really really really recommend this series. This book is so beautifully written and is definitely worth the time. Also in this book, we get a dual perspective of both Ethan and Lena, which makes the entire story all the more effective. If you haven't read it yet, or the series at all, then go read it! It's so good.

There was so much to this book that I loved, I don't even know where to start. I'm going to start with the general plot line, which unfolded so perfectly. Everything happened how it was supposed to, yet the book remained to be unpredictable. There was never a minute of inaction.

The character development was done so well. Comparing the first book to the last, I saw how much each character had grown and changed, and how much Gatlin itself had changed. I was especially proud of Lena, in my mind she learned the ultimate lesson. During the first two books, she somewhat took Ethan for granted, but once she'd lost him, she finally figured out how much she needed him around, and that fueled her motivation to get the Book of Moons to get him back.

The development of Sarafine was also done wonderfully. As we start to get glimpses of her past, she becomes less a figure of evil and more a relatable human. Her final death in the last book solidifies this view. She died so Ethan could live. So he could defeat Angelus. They had a common enemy which allowed her to put aside her hatred for him. This idea of self- sacrifice is getting more and more populat within YA fiction, and every time I think it's done so well.

One thing I thought could have been better was the way the dual passages were done. I wished they switched every other chapter, because then I felt like I could have gotten an equal amount from both sides. I wanted to see Lena's perspective when she found the crossword puzzles in the newspaper, or when Ethan asked her for one of her charms. I think reactions from both would have been more effective.

Overall I would rate this book a solid 95%. It's my favorite book in the series and definitely worth read!
If I had to rate the books in order...
1. Beautiful Redemption
2. Beautiful Creatures
3. Beautiful Chaos
4. Beautiful Darkness

I can't wait until May when the spin-off series featuring Link and Ridley comes out. I can't wait to read how their story turns out!

Posted by Unknown at 3:42 AM No comments: 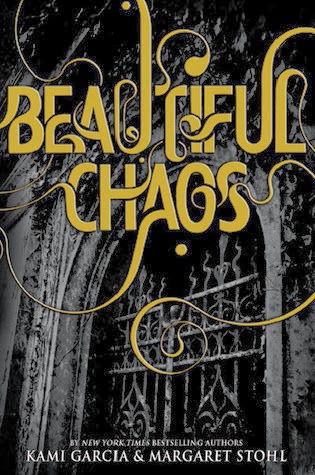 Ethan Wate thought he was getting used to the strange, impossible events happening in Gatlin, his small Southern town. But now that Ethan and Lena have returned home, strange and impossible have taken on new meanings. Swarms of locusts, record-breaking heat, and devastating storms ravage Gatlin as Ethan and Lena struggle to understand the impact of Lena's Claiming. Even Lena's family of powerful Supernaturals is affected-- and their abilities begin to dangerously misfire. As time passes, one question becomes clear: What-- or who-- will need to be sacrificed to save Gatlin?

For Ethan, the chaos is a frightening but welcome distraction. He's being haunted in his dreams again, but this time it isn't by Lena-- and whatever is haunting him is following him out of his dreams and into his everyday life. Even worse, Ethan is gradually losing pieces of himself-- forgetting names, phone numbers, even memories. He doesn't know why, and most days he's too afraid to ask.

Sometimes there isn't just one answer or one choice. Sometimes there's no going back. And this time there won't be a happy ending.

Beautiful Chaos is the third installment in the Caster Chronicles. If you haven't read any of the books before this one: Beautiful Creatures and Beautiful Darkness, then stop reading this review and go read those books. This one picks up from where Beautiful Darkness ended. The Order has been broken and the End of Days is coming, unless Ethan can figure out how to fix it.

The character development in this book was so well written. I began to like every character (except Liv, which I will get to later). Lena, John, Ethan and even Dark characters like Sarafine were developed in such a way, it was impossible to not like them.

My favorite thing in this entire book was definitely the flashbacks into Sarafine's past. In this book, she wasn't just Lena's evil mother. Now she has a real identity, a real past, and real emotions from the audience. This made her death all the more memorable.

In the previous book, Lena was the jealous, standoffish girlfriend and she annoyed me a lot. After Ridley cast the Furor and Lena was able to see Liv's perspective, she became more understanding. She understood Liv's position in her lack of friends and they became closer, as did the rest of the cast of characters.

I have to admit, I'm not too fond of the Liv/John pairing. I knew it was never going to happen, but I always hoped that Liv and Ethan would end up together. I could feel how uncomfortable Ethan was whenever he walked in on Liv and John. I'm really happy that Liv ended up happy, but I really wanted to see Ethan and Liv together. Also, this might just be me, but I pictured Liv as a tough. smart chick so for me, she cried way too many times.

Ridley frustrated me a lot in this book. It seemed to me she was trying way too hard to be Dark. I completely get where she's coming from, but it was just so heartbreaking to watch Link get turned down after he poured his heart out to her. I hope they resolve this conflict because i really want to see Link happy; he's one of my favorite characters.

The ending was literally the worst thing ever. I knew that Ethan was The One Who is Two the moment I learned about his fractured soul. Although I honestly didn't think I cared that much. It was when he said goodbye to Link and Lena that I started crying, basically bawling. Because of this ending, I am so thankful I waited to read it; I don't think I could have handled that cliffhanger without the next book in hand.