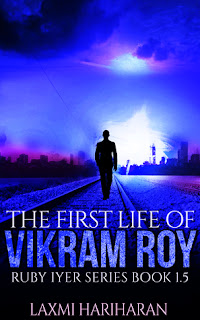 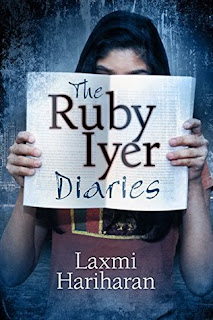 Both of these short stories are novellas associated with the The Many Lives of Ruby Iyer. If you want to find its review you can click here.

I think both of these covers are really nice, though I have to admit I like the scheme of The First Life of Vikram Roy better, especially when all of the books match the same layout. They have an air of mystery to them which is definitely eye-catching.

The writing style for both was the same, and I have to say I enjoyed these short stories far more than I enjoyed The Life of Ruby Iyer. The writing was more precise and much easier to understand.

Both short stories gave backgrounds on our two main characters and I really liked Vikram's story, more than Ruby's. Vikram's back story was much more complete and flowed extremely well. We saw a progression in Vikram from a sweet innocent boy to the hardened man in Ruby's story. Personally I liked his perspective a lot more than Ruby's. Rub'y backstory seemed rushed and choppy. We get glimpses of her and her past but not a completely storyline.

Because the storyline was so much more fleshed out in Vikram's story, the relationship between the characters was a lot more believable. We can easily see why Vishal resents him and how that particular relationship developed, as well as the effect everyone in Vikram's life has had on him. In Ruby's case, we didn't get to see as much of this. Her relationship with Sanjay seemed weak and we didn't even get to see Panky who was a major part of the book.

Like I mentioned before, because Vikram's story had so much more development. We saw his progression into the character we know and love, and while we saw bits and pieces of the same for Ruby, her development wasn't as concrete as Vikram's was.

In general, I enjoyed Vikram's perspective much more than Ruby's. I thought he was a lot more relatable than Ruby was and the writing fit his narrative better.

Similar to character relations, we saw exactly how each relationship affected Vikram, while we didn't get the same for Ruby.

While the writing was the same for both books, I found that Vikram's story was much easier to visualize in terms of setting.

Because I had more of an affinity for Vikram's story, I found his background more interesting than I found Ruby's.

Because these were backstories, there wasn't too much unpredictability in them, though I have to say that Vikram's story had many more gasp-worthy moments than Ruby's story. We knew the initial and final states but everything in between had yet to be decided, a journey that had many more twists and turns in Vikram's story.

Overall I thought both of these short stories were fantastic, much better than the original book. Specifically I thought Vikram's story was very well-written. The entirety of it flowed incredibly well and by the end the reader would easily see what molded him into the hard man we see in Ruby's story.

Ruby's backstory, on the other hand, lack a little in terms of character development. Her story was substantially shorter and, as a result, I felt like the characters and relationships could be fleshed out more. Though the writing in this story was definitely better than the original book.

If you guys read these short stories, let me know what you think!
Posted by Unknown at 7:55 AM

Email ThisBlogThis!Share to TwitterShare to FacebookShare to Pinterest
Labels: A, B+