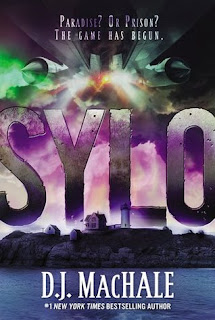 Does Tucker Pierce have what it takes to be a hero when the U.S. military quarantines his island?
Fourteen-year-old Tucker Pierce prefers to fly under the radar. He’s used to navigating around summer tourists in his hometown on idyllic Pemberwick Island, Maine. He’s content to sit on the sidelines as a backup player on the high school football team. And though his best friend Quinn tells him to “go for it,” he’s too chicken to ask Tori Sleeper on a date. There’s always tomorrow, he figures. Then Pemberwick Island is invaded by a mysterious branch of the U.S. military called SYLO.

And sitting on the sidelines is no longer an option for Tucker, because tomorrow may never come.
It’s up to Tucker, Quinn, and Tori to uncover the truth about the singing aircraft that appears only at night—and the stranger named Feit who’s pushing a red crystal he calls the Ruby that brings unique powers to all who take it. Tucker and his friends must rescue not just Pemberwick Island, but the fate of the world—and all before tomorrow is too late.

I really like the cover. It creates this air of mystery while maintaining the science fiction genre.

I liked the writing style of this book but I didn't think it was above average. It sufficiently told the story but I didn't find it extraordinary by any means.

While the plot kept you on your toes, I felt like the reader was kept in the dark almost too much. While we were through into action after action, which was incredibly thrilling but confusing. Even by the end of the book I still really had no idea what had happened or what was happening. But because this is a series I'm sure we'll find out eventually. In that it resembles the 5th wave series, which I do enjoy.

I didn't hate the character relations, but I didn't love them. I appreciated that there was no insta-love but the relations between the characters seemed a bit childish for the situation they were in. Quinn would joke about a spark between Tori and Tucker in the middle of an attack, which seemed out of place. I hope there's more development between the couples that were introduced in the first book.

Because this was the first book to the series, there wasn't as much character development as I had hoped but there's still room for more. We can see Tuck starting to transition from his normal teenage life to the life of a fugitive in an apocalyptic world. I'm excited to see his character progress throughout the series.

Personally, I really didn't like Tuck. He was a traditional, bland character. I know it was part of his personality to not care about anything, but it got tiring really fast. It worked in a sense because it provided an unbiased perspective for the story, but we also didn't really get any substance from him. I feel like we didn't get deep enough into his personality for me to actually like him. Maybe, hopefully, that'll change in the next couple of books.

I felt like the minor characters were what made this book. At the beginning they all seemed dysfunctional but as the stakes were raised we could see how each character fell into the group. As the series goes on they'll learn how to work together as an oiled machine, and I'm excited to see that progression.

The setting was well set. I could easily visualize the setting of where the events were taking place.

Although I still don't know what exactly is going on, I enjoyed the storyline. I thought it was pretty interesting and was fairly thrilling,

None of my predictions for the book actually came true. I went into this book thinking it was about an alien invasion and I'm still not totally convinced that it isn't about one. But the great thing about this book is that as the reader we have no idea what the plot trajectory is, so every major event that happens is a surprise to us.

Overall, I enjoyed this book. I thought it was a thrilling read. As long as I can get my hands on the rest of the series I'll hopefully be continuing it. If you liked the 5th wave, this is definitely a series you should try.
Posted by Unknown at 8:14 AM

Email ThisBlogThis!Share to TwitterShare to FacebookShare to Pinterest
Labels: A-